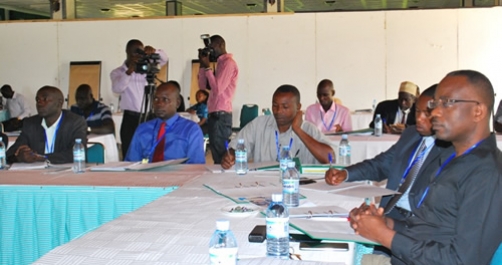 The training was conducted at Entebbe Botanical Beach Hotel as part of the USAID FEED THE FUTURE Activities partnership including Enabling Environment for Agriculture (EEA), Agricultural Inputs (AI), and Commodity Production and Marketing (CPMA) and the Education and Research to Improve Climate Change Adaptation (ERICCA). ERICCA is implemented by FHI360. The main goal of ERICCA is to assist Ugandans to build a hub of academic, professional development and research excellence in climate science, climate adaptation and related disciplines in partnership with Makerere University College of Agricultural and Environmental Sciences (CAES) through the establishment and support of the Makerere University Centre for Climate Change Research and Innovations (MUCCRI).

The four-year project that started in 2013. The project has been operating for the last one and a half years. According to the Chief of Party, ERICCA working with the MUCCRI Dr. Lynne Carter, there is still poor understanding of climate change and variability in Uganda and hence inadequate adaptation and mitigation measures currently in place in the country.

Dr. Carter said climate change is an issue everywhere and will continue to impact Uganda. She expressed the need for people to know the climate change causes, changes, how to adapt and mitigate. She said, that was the reason why they thought of initiating the Climate Champions by recruiting persons from various districts. She said the training of climate champions will leave a legacy of increased ability in the country to understand the choices and options to avoid the avoidable climate changes as well as be better prepared to cope with the impacts.

A climate champion according to Dr. Carter is someone passionate about understanding climate science basics, likely impacts in their regions and ways to respond. A climate champion is also a local or regional “go to” person for accurate and useful climate change advice. Climate champions can also be referred to as Long term channels of information dissemination in two directions. Within the community/ business etc. to support local decision making and increasing knowledge. The second direction is feedback from the community to researchers and policy makers about district/regional, local issues, concerns, needed assistance or information.

In the first two- day training, climate champions learnt a number of topics like climate change science, and what climate change is not, identifying likely impacts, international issues, gathering methods for responding/prepare and plan to protect and bringing the global issues to a Uganda scope. Climate champions were also introduced to a range of climate related topics such as climate and gender, climate and development, mainstreaming climate in planning and case studies on mitigation and adaptation.

Speaking during the training the Senior Climate Change officer, Ministry of Water and Environment who is also Public Relations Officer Bob Natif described the initiative as critical in helping the ministry meet her objectives on education and training. He observed that climate change is a relatively new area that requires a group of people with necessary skills and enhancing action.
“Uganda signed and ratified the UN framework on climate change. As part of the framework, we need to stabilize the greenhouse emissions that are distorting the climate system. Climate change affects ecosystems and people differently from country to country”. Mr. Natif said.